The recession has brought MONSTERS into my life...MONSTERS I tell you!

Ok so this is only partially true...I would probably be making my nieces and nephews monsters for Christmas this year anyways...but just the same. Much easier and cheaper to make these little creatures for them then it would be for me to make my way to the one remaining Toys R' Us in Chicago. Truth be told...Ugly Dolls...always thought they were cute and ALWAYS thought "I could totally do that". So I put my needle and thread where my mouth was and got to crafting! 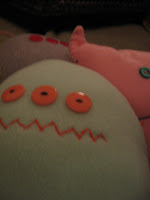 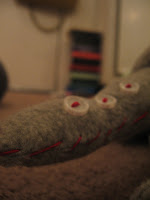 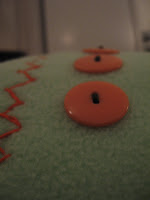 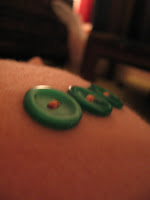 I hope that my little monsters like their little monsters. On another note my wonderful sister-in-law sent me the best birthday present...The Little Bandits from Emily Martin. I tried my best bandit disguise on tonight, but in true MaryRose fashion... 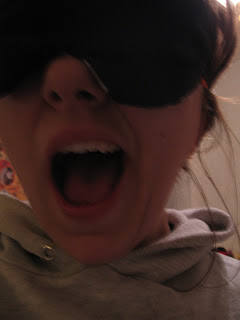 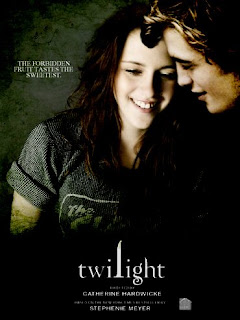 There are many things in this world that I get really excited for. Cupcakes, new music from Richard Buckner, Harry Potter, Rotofugi, Buffy the Vampire Slayer and the Whedon world, stationary, bird tattoos, scarves, Kennedy’s, pumpkins, etc. So it didn’t come as a surprise to me to be ultra (borrowing this expression from the new roommate Audrie) excited about the Twilight saga. I mean really vampires, love, emo teenagers, macabre. What more is there to love? So when Mallory told Martha, Ben and I that we simply must read the books I was too happy to!

A few months ago my heart was broken. I had it all planned out…for my 27th birthday weekend I would be seeing Harry Potter and the Half Blood Prince. I mean really there isn’t anything better than Harry Potter on your birthday. So I took book six off my bookshelf and began to re-read it in preparation. Then I found out…PUSHED BACK TO JULY 2009 SO IT COULD MAKE MORE MONEY! My heart = broken. But the good news was that the Twilight movie had been moved up from its original December release date to November 21st. Hello…new plans for said 27th birthday. In reality all this movie did was make me realize wow…I AM 27 YEARS OLD. So thanks Catherine Hardwicke and Robert Pattinson. Thanks!

(oh by the way Twilight 2…also known as New Moon, as been given the go…guess I will have to feel old again).
Posted by Mary at 9:05 AM 1 comment:

So... getting engaged and going  back to school apparently takes up a lot of time.  I apologize for ignoring my blogging duties.  I am a busy lady!  Not too busy to covet expensive bags online of course!  If only I had an extra $2000 lying around... 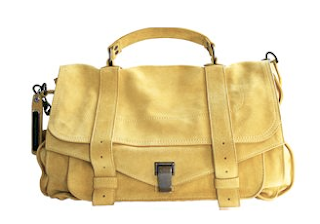 Seriously though, I do love Proenza Schouler's new bag line, PS1.  Much better than all those Louis Vuitton initial bags out there!  To say the least.
Anyhoo, I've been trying to think of wedding ideas lately.  It's slightly overwhelming.  I discovered a cute little blog called Julie Plus Todd.  It is pretty much adorable and seems right up my alley, as I want to DIY as much as possible.  She has a lot of great ideas.  Definitely worth checking out just for everyday things as well.
---Martha!
Posted by Mary at 4:48 PM 2 comments:

To me winter really only means one thing...hot chocolate. And I will admit that I am a fan of dear ole Swiss Miss, but thought I would break out of my "Wichita, Kansas" bubble and try to make my own. Yes that is right...I decided to make hot chocolate...from scratch. And let me tell you this...SO GOOD! 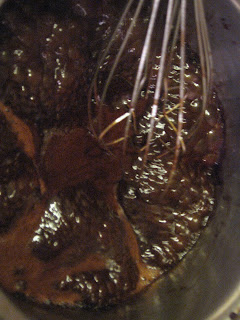 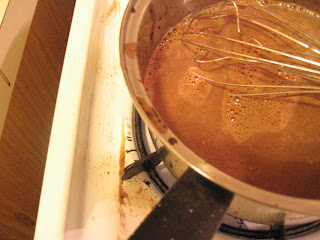 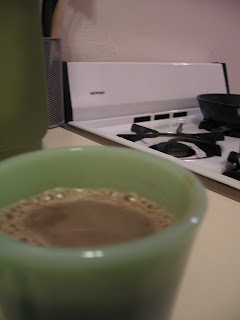 Here is the recipe that I used...and you probably should to!

To cut or not to cut 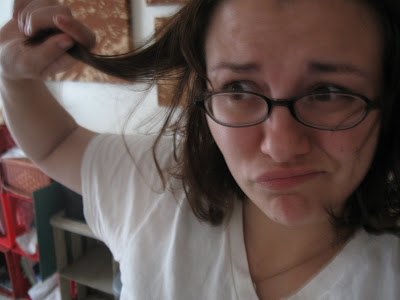 So here is my dilemma....I am at the point where my hair is longer than it has been in years and I am getting the itch to cut it. Which is something that usually happens to me. I always tell myself that I should have long hair when in fact I feel that short hair fits me better. But....come on...long hair is so COOL! What does a girl do? Here is what I am thinking, if I had long hair this is what I would want.... 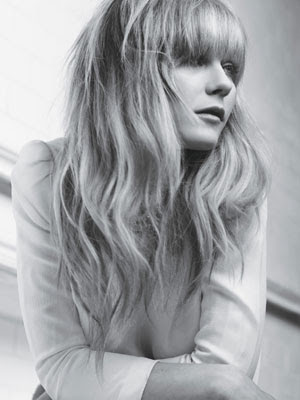 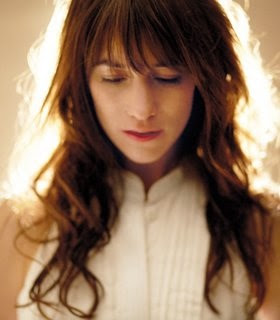 But short hair is just sometimes so effortless looking...and I am pretty comfortable with the shortness...and it would make me look sassier... 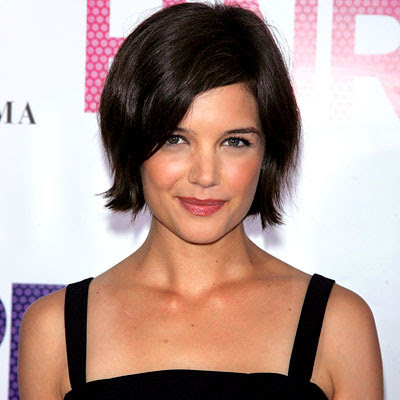 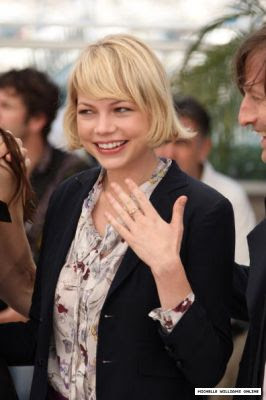 If you want to sing out...sing out!

I have said it before and I will say it again…I LOVE HAROLD AND MAUDE! My love for this film began during my Introduction to the Film Medium class at KU. My professor, Prof. Kevin Willmott, showed the film during our summer class and I just fell…hard. I just have decided that when I am in my 80's I hope to be as cool as Maude is...she is my new role model. And so now with the help of the lovely ladies over at WhoWhatWearDaily I can dress like my role model as well. Good to know that I am not the only one who loves Maude! "Maude may have been a crazy old lady, and Harold was definitely in need of more than just his weekly therapy sessions, but the funeral-going duo certainly had style." 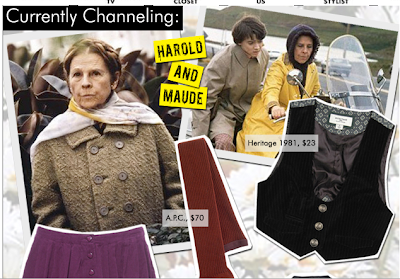 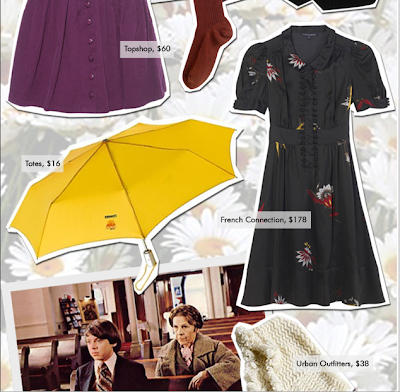 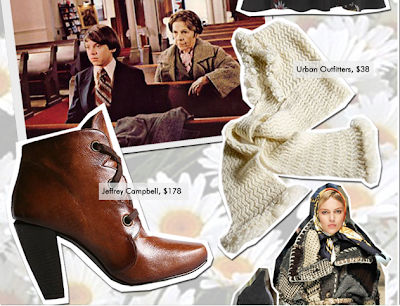 What a week I have had! Ben and I got engaged this weekend! It came as a complete surprise to me. It's a very exciting time for us right now. My lovely ring: 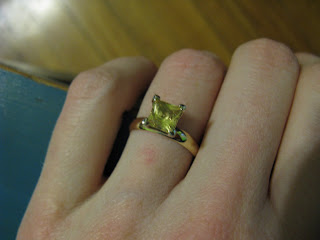 I also finally ordered some boots online. I got them today! I feel like they will open up my wardrobe a lot. I am sure I'll be wearing more dresses this week! 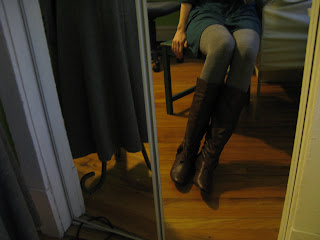 To top everything off, I found out I was accepted to Columbia College Chicago! I'm super excited/super nervous. I should start school in January! I have a feeling I'm going to become very busy very soon...
-Martha!
Posted by Mary at 2:39 PM 3 comments:

So I realize that I am a bit late on this post (nearly a week!). But just the same...I thought it was probably a mandatory thing. See the thing is...my internet at home (which I pirate), hasn't been allowing me to post any pictures! I mean really...how can one have a blog without pictures? Silliness! So without further ado.... 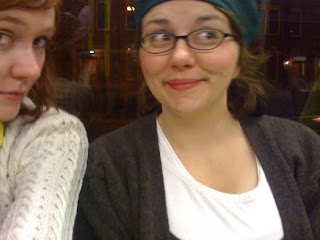 So Hallowen'en actually started a week early for Martha, Ben and I...but more on that in a bit. For the actual night I dressed as a wholesome Girl Scout (none of that "sexy girl scout" business for me thank you) and Martha was the most adorable Daisy Duck. Seriously...ADORABLE. Of course most people had no clue what she was...stupid people! 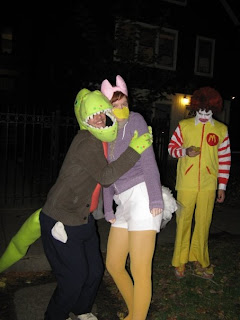 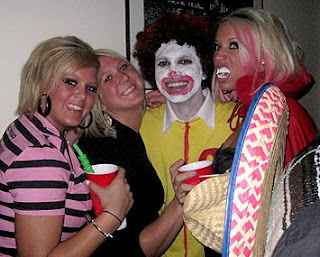 Daisy, Dinosaur and Ronald McDonald. Our friend Imran was fairly scary as Ronald McDonald and he got the most play of the night. What can I say "sexy" girls love them some hamburgers! 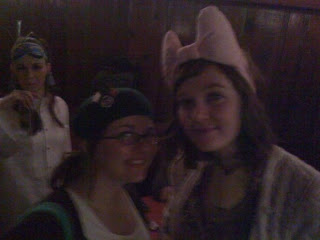 If you will look to the left of the photo you will see Holly Golightly from Breakfast at Tiffany's. This was probably my favorite costume of the entire night. Of course we would see this girl at the Rainbo Club...all the cool kids go there. 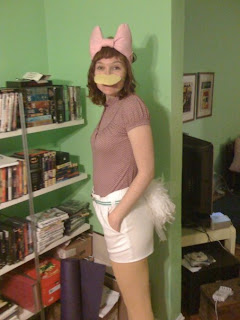 Here of course is Martha as the adorable Daisy Duck..... 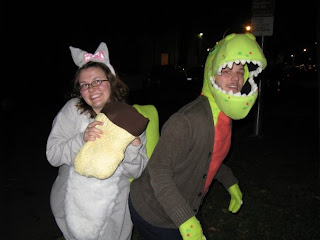 And finally my 12-year-old costume...the squirrel. I wore this to the party the weekend before Hallowe'en proper and felt like a small child. Which to me is usually a good thing, but when you are surrounded by "sexy" nurses, and "sexy" doctors, you begin to feel a little out of place. Plus going to the bathroom in this thing....WAY TOO HARD! All in all this year Hallowe'en was good...but we missed all of our friends from Kansas!

Of course on my day off, it is raining.  I like the rain... when I am inside cuddling under my grandmother's quilt, but today I really needed to get out of the apartment.  I decided to do a little thrift shopping.  Nothing makes me happier than finding hidden treasures for less than five dollars. 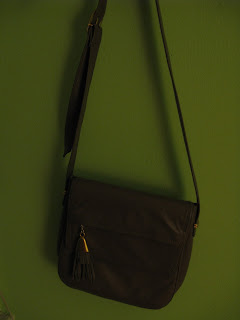 I'm really happy to have found a grey leather purse.  I'm ready to switch from my giant holds-everything purse. 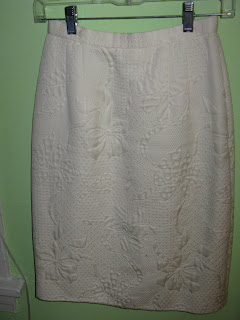 My new quilted skirt!  Sadly, it is a little snug, but I think it will still work.  I can see wearing it with a black sweater and shimmery black tights at a holiday party... Maybe that will give me an excuse to buy these tights from AA.  Hmmm...
Posted by Mary at 2:57 PM 1 comment: